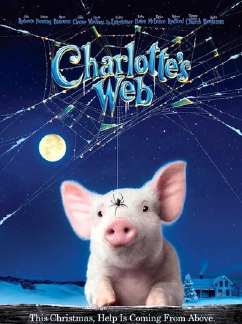 I read a very interesting book called "Charlotte's Web".
It tells the story of a pig and a spider.

The pig was rescued from the water when he was young. Since then, he has become a human pet. When he grows up, people will kill it. But, there are children stop it .The pig wants to have a close friend to save it. At this time, a spider said to him with a tiny voice: "Are you looking for a friend?" "Yeah." The pig answered with excitement, so they became friends.. The name of this spider is Charlotte. After knowing the bitterness of the pig, he quickly gave it the idea: use the web to shows a few words so that people will not think it is an ordinary pig, but a special pig.. So Charlotte went out to pick up the newspaper, and weaved the large characters in the newspaper and hung it on the web. When the day going on, people knew the little pig Weir, and soon someone came over to take pictures of it, and a reporter came to interview the family. Piggy Will is very grateful to Charlotte, Charlotte used a lot of silk for it. After a few days, Charlotte also woven a few words for Will, and Will became famous.

In the late autumn, Charlotte produced eggs and made a bag of silk outside the egg. Will kept it. In a few days, Piggy Will will go out to show, and Charlotte wrote two words for it with the last silk - humility. And said to Will: "I am tired, you will bring me when you come back. Now I can't travel with you, you have to treat my children well, bye!" Charlotte will see you again. Will didn't see Charlotte at the end, so it pinned the only friend who saved his life, and carried it on his back until the little spider was born.
This film told us friendship is valuable